Now in its third cycle, Granite Leaders teaches communication and advocacy skills to homeless and formerly homeless people, and connects them with policymakers. 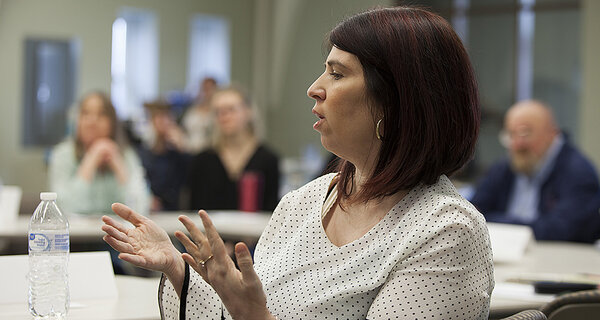 MANCHESTER, N.H. —Fourteen years ago, Chrissy Simonds escaped from her baby’s abusive father – instantly becoming homeless. Eventually they found a place in supportive housing, where she learned to balance a checkbook, get a driver’s license, and embrace a sense of self-worth that had eluded her since her abusive childhood.

Now, she’s a go-to person when the mayor wants to know what’s really going on with homelessness, and she’s frequently testifying at the New Hampshire State House in nearby Concord.

Though it’s not easy to tell her personal story, she says, “it makes me feel better … because then they’re getting the truth. People that work [at a shelter] can act nice for that hour [when an official visits], and that doesn’t mean that’s how everything is going really.”

Her story is one example of what can happen when homeless people are seen not as problems, but as problem-solvers.

Ms. Simonds graduated with the inaugural class of Granite Leaders, a program that teaches communication and advocacy skills to homeless and formerly homeless people, and connects them with those who are working on solutions.

Now teaching its third group, Granite Leaders has spawned a cadre of bloggers, nonprofit board members, and activists well-equipped to share their stories – obliterating stereotypes of homeless people along the way.

Historically, social services haven’t done a good job involving people with “lived experience” in decision-making, but “empowerment” approaches like Granite Leaders could help propel a needed shift, says Donald Burnes, founder of the Burnes Center on Poverty and Homelessness at the University of Denver.

“We have to change the nature of public perceptions,” he says. “All of us tend to think about people experiencing homelessness as somehow damaged…. It’s not that they have to be fixed or cured. They need resources and they need relationships.”

The federal government requires the participation of homeless people on the boards of groups that receive certain funding. But making that representation robust, rather than mere tokenism, has been a challenge.

“We always knew … people who have experienced homelessness who want to get involved, and … folks from nonprofits that wanted them involved, but for some reason the connection was not being made,” says Cathy Kuhn, director of the New Hampshire Coalition to End Homelessness (NHCEH).

The coalition created Granite Leaders to fill that gap. And other communities are starting to take notice. Groups across New England and in New Jersey and Michigan have contacted Ms. Kuhn as they consider launching something similar.

On a sunny Thursday morning during the fourth of six monthly classes, participants gather around a U-shaped set of tables in a church-turned-conference room. The space is provided by Families in Transition, which works in close partnership with NHCEH and also helped Simonds get back on her feet.

Today’s topic: the media – how to prepare for interviews, reach out to reporters with story ideas, and tap into social media platforms.

Simonds shares how a tweet, in which she tagged US Sen. Jeanne Shaheen, led to a connection with state officials who helped her get a court date for child support enforcement – something she hadn’t been able to do for years.

Now she urges everyone she knows, including people experiencing homelessness, to engage politically. “When people say why they don’t want to vote, I always have a comeback, because these people have helped me,” she says.

During a panel discussion with three professionals from area news outlets, Renee, the youngest member of the class, takes notes and pauses to stretch. She’s 19 and expecting a son in a few months, while her daughter, not quite 2, stays with a relative. (She asked to be identified only by her first name.)

Renee says her mother kicked her out at 16, and since then she’s spent some nights on friends’ couches, in tents, in broken sheds, and even in a 24-hour McDonald’s during a blizzard. (Hear her in her own words, below.)

She’s passionate about the need for a youth homeless shelter. New Hampshire is one of few states that doesn’t have one, partly because the low population doesn’t generate enough federal funding to sustain it.

The one lifeline Renee has consistently turned to is the Youth Resource Center, run by the nonprofit Child and Family Services in Manchester. Case managers there helped her get her Social Security number and birth certificate and open up a bank account. She can use the computers and phones, access a food pantry and donated clothes, and join in fun activities.

Staff members have seen her penchant for social justice and for mentoring, so they recommended her for Granite Leaders.

“Young people [need] the opportunity to tailor that passion into an area that’s positive,” says Erin Kelly, director of Child and Family Services. “People like Renee are important people to get around the table…. They are the experts…. Adults [often] invent systems and then no kids come to them and we wonder why.”

Recently the Granite Leaders class visited the State House to hear from a panel of lawmakers. One of them inspired Renee by saying, as she recalls, “We are your servant.… You are our boss. You need to express yourself.”

She gives an example about a bill she would have testified against if she had had time to attend the hearing; it would have required more places to charge security deposits and first- and last-month rent up front. She’s worked over 50 hours a week and still wouldn’t be able to save enough for a one-bedroom apartment under those conditions, she says.

Renee recently found a spot in a shelter, while she and her boyfriend, the father of the baby on the way, wait to get into Families in Transition housing. She’s earned her high school equivalency and hopes to further her education, perhaps for social work.

Her eyes are made up with artistic swoops of silver glitter, and one of the tattoos inked on her chest declares her tendency to see good despite difficult circumstances: “Have Faith.”

“If my story or my experiences can help one person, then I’ve made my difference,” she says.

Granite Leaders graduate J St. Hilaire knows the difference it can make to include homeless people in decision-making.

When she first joined the board of the Concord Coalition to End Homelessness, shortly after completing the class, “everything was really top down and funding oriented, and they [had] lost perspective of what was happening to the homeless people,” she says. Over the next three years, “we made a quantum leap: The city accepted a plan to end homelessness.”

Current class member Grace Jones says the connections here “have really emboldened me and given me a skill set [so] I can go out and rabble-rouse more constructively.”

Ms. Jones and Renee both say that people who don’t know what to do about homelessness underestimate the power of simple acts of respect and compassion.

“I hated my life,” Renee says of a time when she was living with a band of homeless teens in a nearby cemetery. Then a young man befriended her and gave her confidence to make some positive changes, because “he treated me with kindness,” she says. “He didn’t look at me like I was trash or like I was any less of a person…. Being homeless, there’s nothing wrong with you. The situation is what’s wrong.”